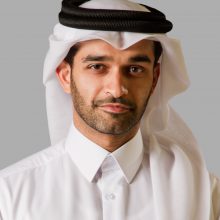 H.E. Hassan Al Thawadi is the Secretary General of the Supreme Committee for Delivery and Legacy (SC), the organisation responsible for coordinating amongst public and private entities to ensure that infrastructure and development projects are delivered in readiness for the 2022 FIFA World Cup.

His appointment in March 2011 as Secretary General followed on from his role as Chief Executive Officer in Qatar’s 2022 Bid Committee, in which he worked closely with Bid Chairman, H.E. Sheikh Mohammed bin Hamad Al Thani, promoting Qatar’s ultimately successful attempt to bring the FIFA World Cup to the Middle East for the first time.

In addition to this, he also serves as the Chairman of the 2022 FIFA World Cup LLC, – the joint venture between FIFA and the SC responsible for organising and staging the event. In 2013, he was appointed to FIFA’s World Cup Organising Committee (the committee responsible for all matters pertaining to the FIFA World Cup) as Special Advisor.

A lawyer by profession, Al Thawadi previously served as General Counsel for Qatar Investment Authority (QIA) and Qatar Holding, entities founded by the State of Qatar in 2005 to strengthen the national economy by diversifying into new asset classes and growing Qatar’s long-term strategic investments.

He was appointed to the board of Qatar Investment Authority by H.H. the Amir Sheikh Tamim bin Hamad Al Thani in July 2020.

Al Thawadi is a graduate in Law from the University of Sheffield and speaks Arabic, English, Spanish, and French.