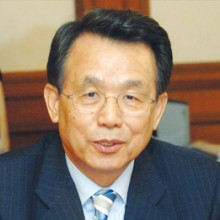 Dr. Han Seung-soo is a Member of the Republic of Korea’s National Assembly, to which he was first elected in 1988. Dr. Han has served in many areas of public life including, most recently, as Minister of Foreign Affairs and Trade from March 2001 to February 2002. From 1996 to 1997, he was Deputy Prime Minister and Minister of Finance and Economy and served as Chief of Staff to the President from 1994 to 1995. He held the post of Minister of Trade and Industry from 1988 to 1990. In 1993 and 1994, Dr. Han represented the Republic of Korea as its Ambassador to the United States, and he is a former Chairman of the Council of the Republic of Korea Group of the Inter-Parliamentary Union (IPU).

Throughout his tenure as Minister of Foreign Affairs and Trade, Dr. Han played the leading role in furthering his government’s policy of peace and reconciliation («Sunshine Policy») on the Korean Peninsula. It was during this period that the Swedish Prime Minister, in his capacity as President of the EU, made his groundbreaking visit to Seoul and Pyongyang in May 2001. Dr. Han also contributed to addressing the challenge of international terrorism in various ways such as participating in the Tokyo Conference on Reconstruction Assistance to Afghanistan held in January 2002.

As Deputy Prime Minister and Minister of Finance and Economy, Dr. Han was the Republic of Korea’s chief economic policy maker. He was the principal minister who oversaw the negotiations for the accession of the Republic of Korea to the Organisation for Economic Co-operation and Development (OECD) in 1996. Foreseeing the important role that venture businesses would play in the country’s economy in the twenty-first century, he initiated and actively promoted the legislation of the incentive stock option system and the technology-based KOSDAQ stock market.

During his tenure as Chief of Staff to the President, Dr. Han assisted the President in effectively carrying out reform programmes in all fields of national policy. It was during this time that local elections took place in the country, restoring local autonomy for the first time in 35 years. It was also during this period that the first offer of economic assistance, on a humanitarian basis, was made to the Democratic People’s Republic of Korea (DPRK) in the form of rice.

Throughout his tenure as Ambassador of the Republic of Korea to the United States, Dr. Han was heavily involved in the resolution of DPRK nuclear issues, including the so-called nuclear crisis of the spring of 1993.

Before his election to the National Assembly from his home town of Chunchon in Kangwon Province in 1988, Dr. Han had a long and distinguished academic career. He was Professor of Economics at Seoul National University from 1970 to 1988. He taught economics at the University of York from 1965 to 1968, and at the Department of Applied Economics, University of Cambridge, and Emmanuel College, Cambridge, from 1968 to 1970. He was a Senior Fulbright Scholar at the Department of Economics, Harvard University, from 1985 to 1986, and a visiting Professor at the Faculty of Liberal Arts and Sciences, University of Tokyo, from 1986 to 1987.

Educated at Yonsei University and Seoul National University, he obtained his doctorate in economics from the University of York, United Kingdom, in 1968 and was also awarded an Honorary Doctor of the University in 1997. He is a laureate of the sixth European Communities Prize, which he was awarded in 1971 for his doctoral thesis, “The Growth and Function of the European Budget”.