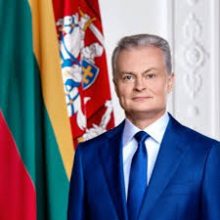 President Gitanas Nausėda was born on May 19, 1964, in Klaipėda. In 1987, he received a bachelor’s degree in economics and continued his studies in the master’s programme. In 1993, he became Doctor of Economic Sciences. From 1990 to 1992, he studied at the University of Mannheim in Germany under prestigious DAAD scholarship. Before he was elected President, Gitanas Nausėda worked in both private and public sectors. This experience shaped his broad and comprehensive approach to the economy. His career in the public sector started in 1993 as Head of the Financial Markets Department at the Lithuanian Competition Council. One year later, he moved on to work at the Bank of Lithuania and became Director of the Monetary Policy Department in 1996. From 1998 to 2000, he was member of the Board of the Bank of Lithuania.

From 2008 to 2018, Gitanas Nausėda was adviser to the chairman of SEB Bank – a leading bank in Lithuania – and its chief economist. During this time, he was actively involved in academic activity, becoming associate professor at Vilnius University International Business School in 2009.
Special mention should be made of the election campaign of Lithuania’s President Valdas Adamkus, which led Gitanas Nausėda to engage in politics by joining the campaign team. After his victory in the election, President Adamkus invited the future President to join his team of advisers. Gitanas Nausėda decided to choose the middle path: he continued to work in the private sector and was public adviser to President Adamkus.

In 2018, Gitanas Nausėda left SEB Bank to run for President of the Republic of Lithuania. He was elected on May 26, 2019, and inaugurated as President on July 12.