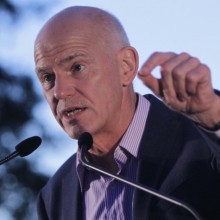 George Papandreou was Prime Minister of Greece during the eurozone financial crisis, Foreign Minister during the Balkan conflict, and he is the current President of the Socialist International, the world’s largest organization of progressive political parties. He is a member of the Club de Madrid, a select group of former heads of state, and he is a member of the Aspen Minister’s Forum, a prestigious group of former Foreign Ministers assembled by Madeline Albright under the auspices of the Aspen Institute. He is also a member of the Global Leadership Council of Mercy Corps, an international NGO supplying humanitarian relief in nearly every conflict zone around the world. Papandreou is a globally recognized expert on the future of the EU, and on the on-going eurozone financial crisis. He is at the forefront of the discussion on the threat of the dangerous political figures that fuel nativist ethnocentrism and xenophobia. Named as one of Foreign Policy magazine’s “Top 100 Global Thinkers,” he speaks with authority on the future of the European Union with regard to the refugee crisis, economic stability, global security and shifts in geopolitical alliances. He was born and educated in the U.S., with degrees from the London School of Economics and Harvard.