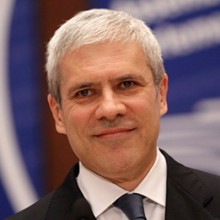 Boris Tadić was the President of Serbia from 2004 to 2012. During this time he was also the Leader of the Democratic Party, and is now its Honorary President. He previously served as the Yugoslavian Minister of Telecommunications from 2000 to 2003, and as the Minister of Defence of Serbia and Montenegro from 2003 to 2004. As President, he submitted Serbia’s application to join the European Union, and secured Serbian membership in NATO’s Partnership for Peace programme. He is a Board of Trustees Member of the Nizami Ganjavi International Center.