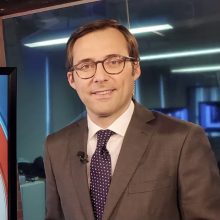 Gustau Alegret is an international broadcast journalist who works in Washington DC for the international news channel NTN24. He is the director and TV anchor for Cuestión de Poder and Club de Prensa, two daily broadcast shows that set up the daily news through live interviews. He is a member of the Foreign Press Correspondents Association, and has won three Emmy Awards, among other professional recognitions. He is also a World Economic Forum’s Media Leader.

He has more than 20 years of experience working in various media outlets in Spain and in the U.S., specializing in politics. In Washington, he follows the day-to-day news of the White House, U.S. Congress, State Department, and Latin American politics, a region he frequently visits.

Since 2007, he has been the U.S. correspondent for RAC1. Previously, he worked as a journalist for Radio Intereconomia, Ona Catalana Radio, Europa Press Agency, COM Radio, Plataforma Digital (Canal +), and Catalunya Radio, among others.

He has served as Director of Communications at the Ministry of Trade, Tourism and Consumer Affairs (Catalan Government); and as a strategic communication consultant at the Inter-American Development Bank (IDB), and at the corporate communication company Intermedia GdC.

His academic experience includes visiting professor in Political Communication, Management Crisis, and Media Training. He is an active member of the National Association of Hispanic Journalists (NAHJ) and the Col·legi de Periodistes de Catalunya.