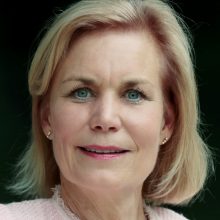 Gunilla Carlsson joined UNAIDS in February 2018 as the Deputy Executive Director for Management and Governance and Assistant Secretary-General of the United Nations and was appointed Executive Director a.i. in May 2019.
A strong leader in global health and development, Ms Carlsson served as an elected member of the Swedish Parliament from 2002 to 2013 and as the Minister for International Development Cooperation from 2006 to 2013. She also served as an elected member of the European Parliament from 1995 to 2002.