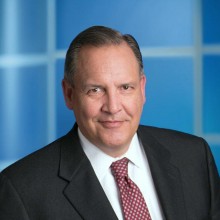 Gregory Hayes was elected Chairman of United Technologies Corp. in September 2016. Hayes has been President, Chief Executive Officer and director since November 2014.

Hayes previously served for more than six years as the company’s Senior Vice President and Chief Financial Officer. In this position, he played a critical strategic and operational role in reshaping the company’s portfolio to focus on its core aerospace and building systems businesses. During this time, UTC successfully acquired and integrated Goodrich Corporation and acquired a majority interest in the International Aero Engines (IAE) program, streamlined its Carrier business and fire and security portfolio, and divested more than $8 billion of non-core businesses.

Hayes came to UTC through the 1999 merger with Sundstrand Corporation, where he served in a number of leadership positions, and became UTC’s Senior Vice President and Chief Financial Officer in 2008. In this role, he also had responsibility for UTC’s Corporate Strategy group.

Hayes earned a bachelor’s degree in economics from Purdue University in 1982 and is a Certified Public Accountant. He also serves on the Board of Directors for Nucor Corporation (NYSE: NUE), the largest steel producer in the United States.​