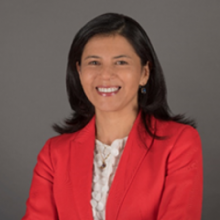 Her technical vocation, management capacity and passion for public service have led her to hold prominent leadership roles, both in the private and public sectors.

She worked for 20 years at Banco de la República (Central Bank of Colombia), where she served as head of the external, financial and macroeconomic programming sectors. Also serving as director of the Communication and Economic and Financial Education Department, Office of the Governor.

Between 2009 and 2012 she worked in the Ministry of Finance as the director of macroeconomic policy during the administrations of both Óscar Iván Zuluaga and Juan Carlos Echeverry. In September 2015, Edgardo Maya Villazón, the Comptroller General of the Republic, appointed Gloria Amparo Alonso to the position of Vice Comptroller General, the second-in-command in this control entity. Here she led the project of institutional strengthening and modernizations of the Contraloría (Office of the Comptroller), which adjusted the entity´s auditing practices to international standards.

In August 2018, President Iván Duque named her director of the Departamento Nacional de Planeación (National Planning Department), DNP, where she will participate in the major discussions on economic and development issues taking place in the country. In its 60 years of history, Gloria Amparo Alonso is the fifth woman to head the DNP.