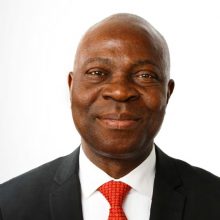 Gilbert F. Houngbo became the sixth President of the International Fund for Agricultural Development (IFAD) on 1 April 2017. Born and raised in rural Togo, Houngbo has spent more than 30 years working to improve the lives of some of the world’s most vulnerable people, with extensive experience in political affairs, international development, diplomacy and financial management. Prior to his appointment as IFAD President, Houngbo was the Deputy Director-General of the International Labour Organization (ILO) where he led field operations in more than 100 countries and managed its bilateral and multilateral partnerships. He served as Prime Minister of the Republic of Togo from 2008 to 2012, where he introduced economic reforms and enhanced the rule of law and civil liberties. From 1996 to 2008, he undertook a number of roles at the United Nations Development Programme (UNDP) including Chief of Staff and Assistant Secretary-General, Africa Regional Director, where he led poverty alleviation programmes in 45 countries in sub-Saharan Africa. Prior to this, he spent a decade in the private sector, including at Price Waterhouse, Canada, where he worked in Audit and Financial Advisory Services. Houngbo has a Matrîse en gestion des entreprises from the University of Lomé, Togo, and a Diplôme d’Etudes Supérieures Spécialisées in Specialised Accounting from the University of Québec, Canada. He is a member of the Canadian Institute of Chartered Professional Accountants.