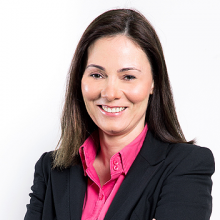 Ghislane Guedira joined OCP Group in 2010 as an Advisor to the Chairman and Chief Executive Officer, and was in charge of Strategic Financial Advisory. She was then appointed Chief Financial Officer in 2013. Among her first achievements were OCP Group’s ratings by two major agencies, as well as the successful international inaugural bond issuance in 2014, followed by a second issuance in 2015.

Prior to joining the Group, Mrs. Guedira held positions as Founder and Managing Director at “Amplitude Conseil” – a local consultancy firm, Secretary General of Winxo – a major Moroccan Fuel distribution company, Director in several managerial positions at the ONA Group – Morocco’s largest conglomerate, and Auditor at Arthur Andersen in both Paris and Casablanca. Mrs. Guedira holds a master’s degree from ESCP Europe, one of the leading Business Schools in Europe.