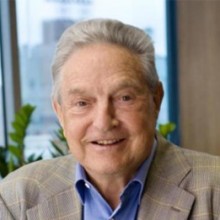 George Soros is the founder and chairman of Open Society—a network of foundations, partners, and projects in more than 100 countries. His commitment to the idea of open society—where rights are respected, government is accountable, and no one has the monopoly on the truth—makes the Open Society Foundations unlike any other private philanthropic effort in history.

Soros began his philanthropy in 1979, giving scholarships to black South Africans under apartheid. In the 1980s, he helped undermine Communism in the Eastern Bloc by providing Xerox machines to copy banned texts, and supporting cultural exchanges with the West.

After the fall of the Berlin Wall, he created Central European University to promote critical thinking. He expanded his philanthropy to the United States, Africa, and Asia, and his Open Society Foundations have supported paralegals and lawyers to represent thousands of individuals who were unlawfully being held, sometimes for years and without any legal representation.

He underwrote the largest and most concerted effort in history to bring the Roma people of Europe into the mainstream. The Foundations have provided school and university fees for thousands of promising students, including young Roma, refugees from armed conflicts, and young people from other marginalized groups.

George Soros helped establish an international system to bring transparency and accountability to the natural resource extraction industries, whose practice of making secret payoffs to local tyrants has for decades fueled some of the world’s worst political unrest and most heinous violence. He has supported independent organizations such as Global Witness, the International Crisis Group, the European Council on Foreign Relations, and the Institute for New Economic Thinking.