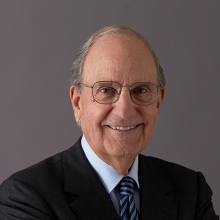 George Mitchell became familiar with the workings of the U.S. Senate in the 1960s, when he served as executive assistant to Democratic senator Edmund Muskie of Maine. In 1980, when Muskie resigned to become secretary of state, Mitchell was appointed to fill the vacancy. As a senator, he became a leading figure for the Democratic Party, and was credited with helping his party win back the majority in the Senate in 1986. Senator Mitchell was elected majority leader in 1989, a position he held until his retirement from the Senate in 1995. He was known among his colleagues in the Senate as an honest leader and skillful legislative strategist. After leaving the Senate, Mitchell was instrumental in negotiating a peace agreement in Northern Ireland and was awarded the Presidential Medal of Freedom. Senator Mitchell returned to the Senate in 1999 to participate in the Leader’s Lecture Series.