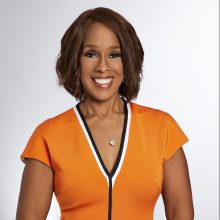 Gayle King is co-host of CBS This Morning. An experienced television journalist, King interviews top newsmakers and delivers original reporting to CBS This Morning and all CBS News broadcasts and platforms. She is also Editor-at-Large of the award-winning O, the Oprah Magazine.

King has handled a number of high-profile assignments, including reporting from Newtown, Conn. in the aftermath of the Sandy Hook Elementary School shooting in 2012. She was honored with an Alfred I. duPont-Columbia Award as part of CBS News’ division-wide coverage of the Newtown tragedy. King contributed to CBS News’ Election Night coverage in 2014 and co-anchored CBS News’ special coverage of several breaking news stories, including the Paris terrorist attacks, the San Bernardino shootings, and the Supreme Court’s landmark decision to legalize same-sex marriage.

King previously hosted The Gayle King Show, a live, weekday television interview program on OWN: The Oprah Winfrey Network. The program, which featured a discussion of a broad variety of topics that include politics and cultural developments, was also broadcast on XM Satellite Radio, where it premiered in 2006. She was also part of the CBS News team that received an Alfred I. DuPont Award for the Network’s coverage of the Sandy Hook Elementary School shooting.

Before moving into print and radio, King worked for 18 years as a television news anchor for CBS affiliate WFSB-TV in Hartford, Conn., during which period, she also hosted her own syndicated daytime program. Prior to joining WFSB, King worked at several other television stations, including WDAF-TV in Kansas City, MO, WJZ-TV in Baltimore, MD, and WTOP-TV in Washington, D.C.

King has received numerous awards for her extensive work as a journalist. In addition to three Emmys, she was honored in 2008 with the American Women in Radio & Television Gracie Award for Outstanding Radio Talk Show and in 2010 with both the Individual Achievement Award for Host-Entertainment/Information and the New York Women in Communications’ Matrix Award recipient.

King spent several years of her childhood in Ankara, Turkey, before returning with her family to the United States. She graduated from the University of Maryland in with a degree in psychology.

The mother of a daughter, Kirby, and a son, Will, she currently resides in New York City.