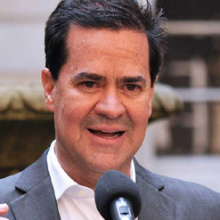 Frank Pearl is a Colombian politician who bartered and is currently serving as chief negotiator in peace talks with Marxist ELN rebels.

In both administrations, he has played a key role in getting both the ELN and FARC rebel groups to the negotiations table.