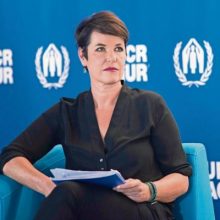 Born in Germany with strong ties to Latin America where she began her career working, among others, with the Chilean Commission of Human Rights and various NGOs both in Chile and Peru.

Her career in UNHCR began in 1993 as Program Manager in UNHCR’s Regional Office in Mexico.
In 1995, she moved to Bosnia-Herzegovina, holding various field and operations positions and remaining there until 1997, when she moved to Slovenia as Responsible for Program and Management.

In 1999 she was appointed as Training Officer at UNHCR Headquarters in Geneva until 2001 when she became the Senior Regional Program Officer of UNHCR in Budapest Office, responsible for the development of the emerging asylum systems of the new Member States of the EU.

She is appointed as Senior Program Manager in Kosovo from 2005 to 2007, the year she took over as Head of Liaison Office of UNHCR Liaison Office in Vienna, representing the UN Agency for Refugees to the UN agencies based in Vienna and the 57 Member States of the Organization for Security and Co-operation in Europe.

She is the UNHCR Representative in Spain since October 2013.

She speaks Spanish, German and English