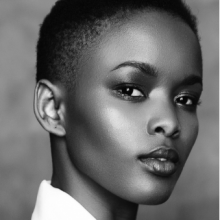 Born and raised in Tanzania, Flaviana Matata’s modeling career kicked off after she was scouted in New York while attending a charity event in 2010.

Throughout her storied career, she has worked with an impressive roster of photographers, including Mario Testino, David Sims, Patrick Demarchelier, Russell James, Nick Knight, Fadil Berisha, Josh Olins, Rankin, and Victor Demarchelier to mention a few.

In addition to modeling, Flaviana has a lengthy list of philanthropic ventures, including her Flaviana Matata Foundation, which empower young girls in Tanzania through education. She is an Angel Ambassador of the Diamond Empowerment Fund and has worked as a Goodwill Ambassador for Tanzanian charity Mitindo House. She’s also worked with Life project for Africa, Malaika for Life, Usher New Look, Malaria No More, SOS Village and the Hassan Maajar Trust.

Flaviana is also a successful businesswoman. She is the founder Lavy Products, a line of non-toxic, cruelty free nail polish that’s available in more than 60 stores in six countries.