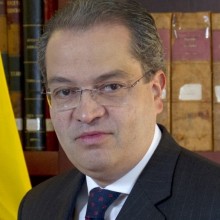 Fernando Carrillo Flórez in October of 2016 was elected Inspector General of Colombia, he served as Ambassador of Colombia to Spain from November 2013 to September 2015. He was Minister of the Interior of the Republic of Colombia. (2012-2013)

Lawyer and economist of the Pontificia Universidad Javeriana of Bogotá, Colombia. His thesis “Financial Sector and Economic Crime” was honored and has been published several times.

He completed a Masters in Law and Public Finance at the University of Harvard and another in public administration and policy at the School of Government John F. Kennedy University.

He was head of the youth movement of the New Liberalism led by Luis Carlos Galán Sarmiento. When he was 21, he started as a professor of Political Science, Constitutional Law and Economic Law of the Javeriana, Los Andes, La Sabana, the Rosario and ICESI universities in Bogotá and Cali. It was an UN Consultant and has been Professor at the Institute of Political Studies in Paris and the Center for Constitutional Studies Spain.

Encouraged and led the “seventh ballot process”, which permitted the adoption of the present Constitution of Colombia. In 1991 he served as Presidential Adviser, member of the Constitutional assembly and Minister of Justice during the administration of Cesar Gaviria (1990-1994).

In June 2010 he was invited by the elected President of Colombia, Juan Manuel Santos Calderón to be the coordinator of the transition committee with the outgoing government. In March 2012 he was appointed Director General of the new Agency for the Legal Defense of the State.

He has written more than 14 books and 80 articles on democracy, governance and justice reform. His book “Democracy with inequality “was delivered to more than 54 heads of state at the Summit EU-Latin America. In September 2012 he was elected Corresponding Member of the Colombian Academy of Jurisprudence with the publication “Legal State Defense, Comparative Law Notes”.

He has been a columnist for several newspapers, including: El Tiempo, El Espectador, and guest speaker at various international venues.