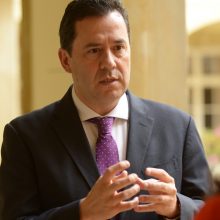 Recently appointed as Advisor to the President of Colombia for the Colombian-Venezuelan Border which is facing the most complex migration process in the country’s history. Previously, he served as Senior Counselor to Colombia’s Executive Director at the Interamerican Development Bank’s Board of Directors. At the IADB, he was also a consultant for the Honduras government designing security and criminal investigation national policies.

Muñoz has a vast experience in the Colombian government both at national and regional levels, serving as Advisor to Bogota’s Mayor and to the Minister of Finance. He was also Private Security Superintendent, Director of the Regional Anti-Smuggling Program, and Director of the National Intelligence Agency, amongst others.

He has a Master’s Degree on Regional and Urban Planning from the London School of Economics (LSE) and a Bachelor Degree in Finance and International Relations from the Universidad Externado of Colombia. Migration, citizen security, and justice are among his main academic interests, combined with a cultural interest in literature, specially Latin American literature.