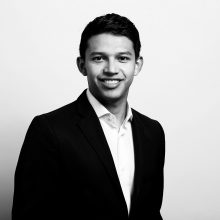 Felipe Marin is a Global Markets & Corporate Advisory Services Associate at Eurasia Group. His role focuses on the firm’s expansion in Latin America as well as engaging existing global markets and corporate clients with interest in the region.

Previously, Felipe worked for prominent international brands such as the Foreign Policy Association, Human Rights Watch, and Americas Society/Council of the Americas (AS/COA).

At AS/COA, Felipe managed the organization’s membership programs and worked alongside the corporate relations team in identifying and securing new corporate members and sponsorship opportunities. Felipe also led the team within Young Professionals of the Americas initiative responsible for membership and financials, as well as the expansion of the initiative to other cities in the United States and Latin America.

In his free time, Felipe serves as an advisor for BUNNYMONEY, an app which empowers individuals to save money (traditional and cryptocurrencies) while donating & investing for a better world.  He holds a bachelor’s of liberal arts (ALB) with a concentration in government from Harvard  University and is originally from Cali, Colombia.