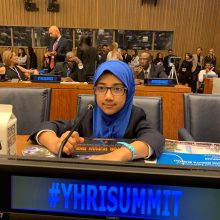 I am a ten-year-old Bangladeshi girl, presently living in New York, USA. I am a Child Rights Activist and Climate Campaigner. I have already spoken in the United Nations, Harvard University, Columbia University, Georgia Tech etc. I regularly raise my voice against Global Warming, Climate Change, Carbon Emission, Fossil Fuel etc. I talk to stop child abuse, gender discrimination and domestic violence. I have pursued a Professional Development Program on Becoming a Leader from the Department of Continuing Education of University of Harvard.

I have obtained “President’s Award For Outstanding Academic Excellence – Gold Certificate” at my elementary graduation. I am a Certified Android and iOS App Developer. I run my own organization named CHIL&D where I work for Climate, Health, Information, Learning and Development. I became champion in “My Goal – For A Better Future” organized by UN Environment. My prototype of Space Rover Perseverance and Helicopter Ingenuity have been nominated for display in the Jet Propulsion Laboratory of NASA. I received the Amazing Artist Award in the Ocean Under Thread category at the Advena World Art Competition.

Recently in Sept 2022, I have addressed the United Nations HeadQuarter about Youth Perspectives on UN Climate Conferences and Global Cooperation. In 2018, at the age of just seven, I addressed the International Youth Day Conference at the United Nations ECOSOC Chamber on Zero Waste Policy and Climate Justice. The following year, in 2019, I spoke at the 74th General Assembly of the United Nations on child labor, child trafficking and child marriage. In 2020, I talked at the 1st Annual Harvard Undergraduate UNICEF Club Conference at Harvard University on climate mitigation and sustainable adaptation.

I played a role as a stakeholder in drafting the Glasgow Agreement for the UN Climate Change Conference in Scotland in 2021 as part of the United Nations Framework Convention on Climate Change. In the same year, I was honored as the Featured Speaker of the UNGA76 Science Summit and as the Lightning Speaker of Global Climate Action Symposium at the Georgia Tech.

I spoke at the International Commission on Human Rights Day 2019 in protest of human rights violations against children in Afghanistan, Syria, Yemen, Palestine and Kashmir. I also spoke at meetings of the United Nations Climate and Ocean Association, at Columbia University Graduate School of Journalism, at Graduate Center of New York City University, and at the New York City Collegiate UNICEF Conference on Climate Refugees. My awareness speech is being relayed on the website of Dear World Leaders. I have delivered speech in an intergenerational gathering of New York Society of Ethical Culture called “Youth Vision”.