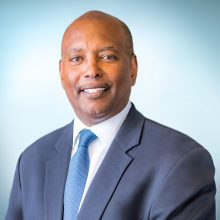 Eric is a high-performing, senior executive with a 30+ year career growing and turning around technology companies ranging from pre-public startups to Fortune 100 organizations ─ achieving consistent success running companies in CEO, President, and COO roles. He has served on boards of public companies trading on the U.S. and Canada stock exchanges, private companies, universities, and foundations
for the past 20 years. His specific areas of expertise include cybersecurity, complex M&A strategy/execution, international corporate finance, government affairs, business transformations, and leading the strategic visions and product development of software, SAAS, cloud, and artificial intelligence technology companies. Of significant further value in today’s environment, Eric is a thought leader in
developing the culture of the companies and senior management in diversity, equity, and inclusion (DE&I).
In his current position as Chairman and CEO, he oversees a portfolio of technology companies comprised of OT Global Technologies, a global IT solution provider; Bridge 2 Technologies, a next-generation SAAS software enterprise; OT Global Protection, a healthcare technology company; and Overland Tandberg, a global Hybrid Cloud software and infrastructure enterprise where he led the public to
private company acquisition. The companies manufacture, develop, service, and operate in over 100 countries.

In previous career roles, Eric was Chairman and CEO of Sphere3D Corporation (Symbol: ANY), which focused on cloud and virtualization and Blockchain; CEO and President Overland Tandberg Corporation (Symbol: OVRL) where he orchestrated the turnaround by transforming the global operations, changed the technology direction and executed two strategic acquisitions; Chairman and Founder of Silicon Valley Management Partners Corporation, a management consulting and M&A advisory firm in the private equity sector; President of the Systems and Networking division at Maxtor (Symbol: MXO); Vice President and General Manager of Storage Systems and Software at Adaptec Corporation (Symbol: ADPT); and Vice President at Dell Technologies $billion enterprise business (Symbol:DELL).

Eric has also held prior executive positions at Conner Peripherals (CNR) – the fastest growing manufacturing start-up in U.S. history, to reach the Fortune ranking, Hitachi Data System (HTHIY), and IBM (IBM) creating innovative strategies, developing new products, expanding global market footprint, making strategic acquisitions to drive significant gains in revenue, profitability, and market share.
Eric is currently serving on the Economic Advisory Board of the San Francisco Federal Reserve, and Chairman of the Board of San Jose State University Tower Foundation. As an independent board member, he served on the Nominating and Governance, Compensation, and Audit Committees of Overland Storage (symbol: OVRL) and Chairman of the Board for Sphere3D (symbol: ANY). He also served as
the U.S. advisor for Nomura Securities Venture Group, a leading global investment bank with over $360 billion in assets. President Obama appointed Mr. Kelly to the Executive Office of President of The United States Council of Advisors on Science, Technology, and Advanced Manufacturing Partnership Steering Committee from 2013 to 2017. The United States Secretary of Commerce Pritzker appointed Mr. Kelly to the U.S. Department of Commerce Advanced Manufacturing Council as Vice Chairman of the workforce
sub-committee from 2013 to 2017.