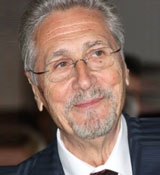 Emil Constantinescu is a Romanian professor and politician, who served as the third President of Romania from 1996-2000. Despite challenging economic conditions, his presidency is now credited with ending civil unrest, a reform of the banking system, and with attracting the first major foreign investments in Romania. He subsequently founded and led the People’s Action Party, using his position to criticise the authoritarian tendencies of other politicians. Constantinescu was an academic prior to his political career, and received degrees in law, geology and geography from the University of Bucharest, where he also taught and served as rector. He is the current president of the Association of Citizenship Education, of the Romanian Foundation for Democracy and also the founder of the Institute for Regional Cooperation and Conflict Prevention. He also serves on the board of the World Justice Project.