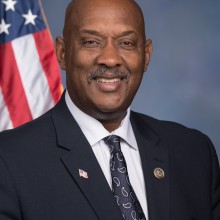 One of five children, Congressman Dwight Evans grew up in North Philadelphia and today lives just blocks from his alma mater, Germantown High School. In 1980, at the age of 26, Congressman Evans was first elected State Representative from the 203rd Legislative District. In the State Legislature he earned a reputation as a pragmatic leader who knows how to put public policy above politics. He made history in 1990 when he became the first African-American Chairman of the House Appropriations Committee, a position he held for two decades. One of Congressman Evans’ proudest achievements has been his work to combat hunger and increase access to quality foods in underserved communities.

Congressman Evans created and championed the Pennsylvania Fresh Food Financing Initiative, which links public and private funds to expand and build grocery stores in food deserts across the Commonwealth of Pennsylvania. The initiative created over 5,000 jobs and brought nearly 100 grocery stores to underserved areas in the Commonwealth that previously had limited access to fresh fruits and vegetables. Throughout his career, Congressman Evans has worked tirelessly to expand and broaden access to economic and educational opportunities.