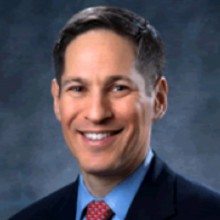 Tom Frieden, M.D., M.P.H., who has been Director of the Centers for Disease Control and Prevention (CDC) since June 2009, has controlled both infectious and chronic diseases in this country and globally. From 1992-1996, he led New York City’s program that controlled tuberculosis and reduced multidrug-resistant cases by 80 percent. Frieden then worked in India for five years helping build a tuberculosis control program that has saved nearly 3 million lives.

As CDC Director, Frieden has intensified CDC’s 24-7 work to save lives and protect people, including through more effective response to outbreaks and other health threats at the local, state, federal, and global levels.  New programs have prevented infections from food and health care, helped Americans quit smoking, reduced childhood obesity, saved the lives of teens and others from car crashes, and extended life-saving treatment and disease prevention in more than 50 countries.

A graduate of the Columbia University’s College of Physicians and Surgeons and School of Public Health, Frieden completed infectious diseases training at Yale University and CDC’s Epidemic Intelligence Service. The recipient of numerous awards and honors, Frieden speaks Spanish and has published more than 200 scientific articles.