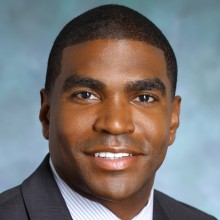 In collaboration with Team BCPS, Dr. Dance spearheaded the development of Blueprint 2.0, a five-year strategic plan focused on academics, safety, communication, and organizational effectiveness. One critical strategy is making high school graduation a systemwide priority. As a result, the BCPS graduation rate surged to 87.8 percent for the Class of 2015, up four percentage points since Dr. Dance’s tenure began in 2012. BCPS was honored with a 2014 District of Distinction award from District Administration magazine for these gains.

Under Dr. Dance’s leadership, fundamental shifts in teaching and learning are taking place through groundbreaking initiatives including S.T.A.T. (Students and Teachers Accessing Tomorrow), designed to create a 1:1 digital learning environment for all 111,000 students, and Passport Schools, which launch world language instruction at Grade 4 to prepare students to graduate fluent in a second language.

His contributions to creating learner-centered environments through technology have been honored with successive Digital Innovation Learning Awards from Digital Promise and Ed Surge: the 2014 Walk the Walk award and the 2015 Open Door Policy award. Dr. Dance was appointed to the 12‐member board of directors for the International Society for Technology in Education, was named one of eight eSchool News 2014 Tech‐Savvy Superintendents, and was named a White House Connected Educator Champion of Change in 2013.

Further, BCPS became a District of Distinction in 2015 for personalizing learning through S.T.A.T. as well as earning the Digital Content and Curriculum Achievement Award from the Center for Digital Education. Also in 2015, Microsoft selected BCPS as its sole “Showcase” school system for innovative digital teaching and learning. BCPS was accepted into the League of Innovative Schools, and the W.K. Kellogg Foundation awarded BCPS a $1.5 million grant to advance equity and digital learning.

Dr. Dance’s leadership and influence were recognized through his 2014 appointment to President Obama’s Advisory Commission on Educational Excellence for African Americans. He was selected by colleagues to serve on the executive committee for AASA.

Recent awards include being named a Superintendent to Watch by NSPRA and an Influential Marylander Honoree by the Baltimore Daily Record. Additional honors include being named one of 10 LinkedIn Next Wave education professionals, one of the National School Board Association’s 20 to Watch educators, and one of the Baltimore Daily Record’s Most Admired CEOs.

Prior to his appointment in Baltimore County, Dr. Dance served as one of three chief school officers responsible for nearly 300 schools in the Houston Independent School District, the nation’s seventh largest school system. Before his tenure in Houston, Dr. Dance served in executive leadership positions in Virginia.

A resident of Baltimore County, Dr. Dance is the proud father of one son, Myles Dallas Dance.