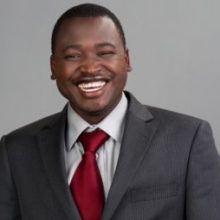 Kennedy is one of Africa’s best-known community organizers and social entrepreneurs. Kennedy grew up in Kenya’s Kibera slum, the largest slum in Africa, where he experienced the devastating realities of life in extreme poverty first hand. The oldest of eight children, he became a street-child at the age of ten. Still, he dreamed about changing his community. In 2004 he had a job in a factory earning $1 for ten hours of work. He saved 20 cents and used this to buy a soccer ball and start Shining Hope for Communities (SHOFCO).

Driven by the innovation and entrepreneurial spirits of the people of Kibera, SHOFCO became the largest grassroots organization in the slum. In 2018, SHOFCO became the youngest-ever organization to receive the Conrad N. Hilton Humanitarian Prize, awarded to non-profits that have made extraordinary contributions to alleviate human suffering.

Although he was entirely informally educated, Kennedy received a full scholarship to Wesleyan University, becoming one of Kibera’s first to receive an education from an American liberal arts institution. He graduated in 2012 as the Commencement Speaker and with honors in Sociology. He later served on the Wesleyan Board of Trustees. Kennedy was awarded the 2010 Echoing Green Fellowship, which is given to the world’s best emerging social entrepreneurs. He was named to FORBES “30 under 30 list” for top Social Entrepreneurs in 2014. He won the 2010 Dell Social Innovation Competition and is a member of the Clinton Global Initiative. His work has been featured on multiple occasions by Nicholas Kristof in The New York Times. Kennedy previously served on the United Nations International Commission for Financing of Global Education Opportunities. He currently serves on the Wangari Maathai Foundation board and he Chairs the Varkey Foundation Alliance for Girls’ Education. Kennedy speaks six languages, is a senior fellow with Humanity in Action, and an Aspen Institute New Voices Fellow.