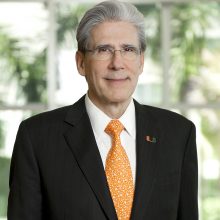 Dr. Frenk was appointed Federal Secretary of Health of Mexico in 2000, a position he held for the full presidential term until 2006. In that position he pursued an ambitious agenda to reform the nation’s health system and introduced a program of comprehensive universal coverage called Seguro Popular, which expanded access to health care for more than 55 million previously uninsured persons.

He was the founding director-general of the National Institute of Public Health in Mexico, one of the leading institutions of its kind in the developing world. He also served as executive director in charge of Evidence and Information for Policy at the World Health Organization and as senior fellow in the global health program of the Bill & Melinda Gates Foundation, among other leadership positions.

Dr. Frenk holds a medical degree from the National University of Mexico, as well as a Master of Public Health and a joint Ph.D. in Medical Care Organization and in Sociology from the University of Michigan.

He has published 189 papers in academic journals and 169 articles in cultural magazines and newspapers, as well as many books and book chapters. His scholarly production has been cited more than 29,600 times. In addition, he has written four best-selling novels for youngsters explaining the functions of the human body. He is a member of the American Academy of Arts and Sciences, the U.S. National Academy of Medicine, the National Academy of Medicine of Mexico, and El Colegio Nacional (the most prestigious learned society of scientists, intellectuals, and artists in Mexico). He serves on the 2 boards of the United Nations Foundation and the Robert Wood Johnson Foundation and has chaired the board of the Institute for Health Metrics and Evaluation since its founding in 2007.

Julio Frenk has received numerous recognitions, including the Clinton Global Citizen Award, the Bouchet Leadership Medal presented by Yale University for promoting diversity in graduate education, and the Welch-Rose Award from the Association of Schools and Programs of Public Health, as well as honorary degrees from 11 universities in the U.S., Canada, Mexico, and Europe.