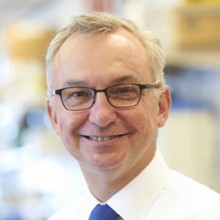 I am a board-certified medical oncologist who works to develop molecularly targeted cancer therapies, with a special focus on breast cancer. I joined Memorial Sloan Kettering as Physician-in-Chief and Chief Medical Officer in 2013 from Massachusetts General Hospital (MGH), where I was Chief of the Division of Hematology/Oncology and Associate Director of the MGH Cancer Center.

Joining MSK was a homecoming of sorts: I did my medical oncology fellowship at Memorial Hospital and was a faculty member on the Breast/Gynecology Service from 1994 through 1996. I then returned to my native Spain, where I led the Vall d’Hebron Hospital in Barcelona, a comprehensive cancer center with one of the largest phase I programs for new cancer therapies in Europe.

My work in the preclinical and early clinical development of therapies has helped introduce a number of important new targeted agents. I pioneered the development of treatments for women with HER2-positive breast cancer; conducted the first clinical trial to demonstrate that patients with advanced HER2-positive breast cancer benefited from treatment with the anti-HER2 monoclonal antibody trastuzumab (Herceptin®); and continue to lead state-of-the-art international clinical trials with trastuzumab for women before and after breast cancer surgery. In addition, I led the clinical development of the second anti-HER2 monoclonal antibody to receive US Food and Drug Administration approval, pertuzumab (Perjeta™), and the pivotal study that led to the approval of everolimus (Affinitor®) for the treatment of patients with hormone receptor–positive breast cancer.

My most recent focus in the laboratory and clinic has been on mechanisms of resistance to anti-HER2 and anti-PI3K agents. (The PI3K pathway is one of the most important pathways in cancer metabolism and growth.) I’m also studying compensatory pathway activation and the development of therapeutic combination approaches, including PI3K inhibitors and anti-estrogen therapies.

I have been actively involved in the American Association for Cancer Research (AACR) for more than 20 years. I’m a founding co-editor-in-chief of the AACR’s high-impact scientific journal, Cancer Discovery, and have served the AACR in many other key capacities, including as president from 2015 to 2016. In addition, I have served as chair of numerous AACR committees, including the Clinical Trials Committee from 2012 to 2013 and the Research Grant Review Committee); I was a member of the Landon Foundation-AACR  Innovator Award for International Collaboration in Cancer Research Committee from 2006 to 2008, the Pezcoller Foundation-AACR International Award for Cancer Research Committee from 2004 to 2005, and the AACR Award for Outstanding Achievement in Cancer Research Award Committee from 2002 to 2003. I was also inaugurated into the 2014 class of fellows of the AACR Academy. Additionally, I am a principal of the Stand Up To Cancer Dream Team “Targeting the PI3K Pathway in Women’s Cancers.”

As Physician-in-Chief, I oversee the clinical component of MSK. This includes the management of patient care in Memorial Hospital as well as at our outpatient clinics and regional locations. I take an active role in efforts aimed at enhancing and expanding MSK’s programs in clinical and translational research.

I truly believe that MSK is one of our nation’s premier cancer institutions, executing the new ideas that are transforming patients’ lives on an almost daily basis. Our vision is to bring treatments to patients that were not available before — indeed, that didn’t even exist before. My primary, overarching focus is on maintaining our clinical excellence. We are who we are because we have the best people anywhere — the best physicians, nurses, and support staff — and we are all committed to the patients who are at the heart of our mission. They are the reason we come to work every day.

I’ve been in oncology for many years and I’ve never seen the acceleration of progress that I am seeing today. While it’s difficult to make predictions — and cancer is anything but simple — major advances in our understanding of cancer biology are changing the way we think about treating these diseases. My MSK colleagues are energizing and inspiring, and I feel privileged to play a part in our communal efforts to conquer cancer.