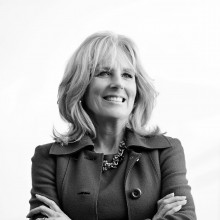 Dr. Jill Biden is a mother and grandmother, a lifelong educator, and former Second Lady of the United States.

She has spent over three decades teaching in community colleges, high schools, and a psychiatric hospital for adolescents. Today, she is a full-time English professor at Northern Virginia Community College—a position she held throughout her time in the White House. During her time as Second Lady, she worked to underscore the critical role of community colleges in creating the best, most-educated workforce in the world. She chairs the College Promise Campaign National Advisory Board, leading the effort to make community colleges free for responsible students.

As a military mother, she has brought significant attention to the sacrifices of military families, in part through her and former First Lady Michelle Obama’s Joining Forces initiative to support military families worldwide. In 2012, following her son Beau’s year-long deployment to Iraq, she released a children’s book – Don’t Forget, God Bless Our Troops – about how her granddaughter dealt with the deployment.

Dr. Biden has also been a prominent voice on the rights of women and girls globally, especially as related to education. During her White House tenure, she traveled to nearly forty countries, visiting almost every region of the world. Today, she continues this advocacy work through her role as Board Chair of Save the Children US.

After Jill and Joe lost their son Beau to brain cancer in 2015, they helped push for a national commitment to ending cancer as we know it. Today, they continue the mission that started as the White House Cancer Moonshot through the Biden Cancer Initiative to inject a sense of urgency into cancer research and care and to deliver better outcomes for patients.