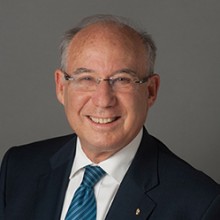 Dr. Jacob A. Frenkel is Chairman of JPMorgan Chase International and a member of the J.P. Morgan International Council. He also serves as a Chairman of the Board of Trustees of the Group of Thirty (G-30) which is private, nonprofit, Consultative Group on International Economic and Monetary Affairs.

Dr. Frenkel served from 2001 to 2011 as Chairman and CEO of the G-30, from 2004 to 2009 as Vice Chairman of American International Group, Inc., and from 2000 to 2004 as Chairman of Merrill Lynch International, as well as Chairman of Merrill Lynch’s Sovereign Advisory Global Financial Institutions Groups. Between 1991 and 2000 he served two terms as the Governor of the Bank of Israel. He is credited with reducing inflation in Israel and achieving price stability, liberalizing Israel’s financial markets, removing foreign exchange controls, and integrating the Israeli economy into the global financial system.

Between 1987 and 1991, he was the Economic Counselor and Director of Research at the International Monetary Fund, and between 1973 and 1987 he was on the faculty of the University of Chicago where held the position of the David Rockefeller Professor of International Economics and served as Editor of the Journal of Political Economy.

Dr. Frenkel is a Laureate of the 2002 Israeli Prize in Economics, a recipient of the Scopus Award from the Hebrew University, the Hugo Ramniceanu Prize for Economics from the Tel-Aviv University, The Czech Republic’s Karel English Prize in Economics, the “Order de Mayo al Merito” (in the rank of Gran Cruz) decoration from the Government of Argentina, the “Order of Merit” (in the rank of Caveliere di Gran Croce) decoration from the Republic of Italy, and the YIVO Lifetime Achievement Award. He is also a recipient of several Honorary Doctoral Degrees and other decorations and awards, including the “1993 Economic Policy Award” by “Emerging Markets” and the “1997 Central Banker of the Year Award” by “Euromoney”.