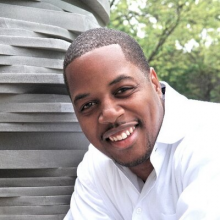 Dr. Christopher M. Jones is executive director and lead maker of the Arkansas Regional Innovation Hub, a nonprofit organization dedicated to inspiring creatives, supporting makers, and advancing the infrastructure for entrepreneurs for Arkansas and the entire region.
With graduate degrees in nuclear engineering and urban planning, and 20 years of experience in energy and infrastructure, diversity, community development, housing and management, Jones is uniquely suited to discuss barriers to innovation. A native of Pine Bluff, Ark., Jones has spent his career promoting science, engineering, equity and inclusion.

Jones has led and participated in research projects in engineering, physics, urban planning, housing and the social sciences, including an 18-month study on the future of nuclear power. As a principal at BCT Partners, Jones was lead executive on numerous multimillion-dollar federal projects. He has served on or supported several boards of directors and spent one year as an algebra teacher in a Boston public school.

As executive director of the Dudley Street Neighborhood Initiative (DSNI) in Boston, Mass., Jones secured more than $6 million in funds for the organization and supported a community of active and engaged residents. As assistant dean for graduate education at the Massachusetts Institute of Technology (MIT), Jones led efforts that doubled minority enrollment and more than tripled minority applications to MIT graduate programs. His academic research ranges from plasma fusion and nuclear nonproliferation to the social impact of large-scale energy infrastructure systems.

Jones holds five degrees, including a B.S. in mathematics and a B.S. in physics from Morehouse College, where he received a full scholarship from NASA and served as student body president; an M.S. in nuclear engineering and an M.S. in technology and policy from MIT, and a Ph.D. in urban studies and planning from MIT. He and his wife, Dr. Jerrilyn D. Jones, an emergency room physician at the University of Arkansas for Medical Science (UAMS) who was raised in Montgomery, AL, live with their three daughters in Little Rock.