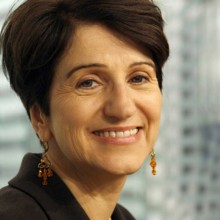 After studying law and graduating from Sciences Po Paris, Dominique Versini has held various positions within the pharmaceutical industry between 1983 and 1994. In October 1993, she participated on a volunteer basis in the creation of the “Samu Social de Paris” together with Dr Xavier Emmanuelli and soon became its Executive Director from January 1995 to May 2002. From May 2002 to April 2004, she was appointed by President Jacques Chirac as the Secretary of State to fight against poverty and exclusion. In 2004, she was named counselor of state at the Conseil d’Etat.
From 2001 to 2006, she was appointed by the President of the French Republic as “Children’s Ombudsman”, an independent State authority, and was at the head of the European Network of Ombudsman for Children (ENOC).
During the local Parisian elections of 2014, she supported Anne Hidalgo as a representative from civil society.
On March the 30th 2014, she was elected Councelor of Paris and was appointed Deputy Mayor in charge of solidarity, families, childcare, child protection services, fight against poverty and seniors. She is also Vice Deputy of the Departemental Board of Paris. Since January 1st 2016, she is also a metropolitan Councelor of the Metropole of the Great Paris.