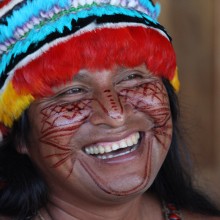 Domingo Peas is from the Achuar Nation of the Ecuadorian Amazon. He has a long history of serving the indigenous peoples movement. Currently Domingo is the technical advisor and field representative for the Confederation of Indigenous Nationalities of the Ecuadorian Amazon (CONFENAIE), which is the organization that represents 11 indigenous nationalities from the region. In this capacity, Domingo is an official spokesperson for the Amazon Sacred Headwaters Initiative for the protection of the basins of the Napo-Marañon Rivers.

Domingo is known for his firm position in defense of the rights of indigenous nationalities and mother Earth, especially in the Central Southern Amazon region where petroleum activities have been successfully kept out. Domingo has also served as the Vice- President and later President of CODENPE (Council of Nationalities and Peoples of Ecuador), as the legal representative of the German Foundation Indio-HILFE and as the provincial coordinator for Pachakutik Movement (indigenous political party).