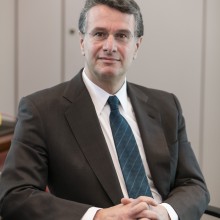 Dimitri Papalexopoulos, born in 1962, has been the CEO of Titan Cement Company since 1996 and an Executive of the Company since 1989. Prior to joining TITAN, he was a consultant for McKinsey & Company in New York and Munich. He holds an MSc in Electrical Engineering from the Swiss Federal Institute of Technology (ETHZ-1985) and an MBA from Harvard Business School (1987).

He is married and has three children. He speaks English, French and German.