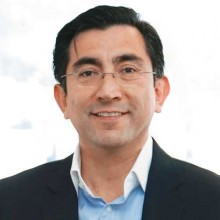 Diego Molano Vega is the former Minister of Information Technologies and Communications of Colombia (2010-2015). Molano created the “Plan Vive Digital”, a national technology plan that transformed the Country and led Colombia to obtain in 2012 the GSMA Government Leadership Award. He has been a Senior Advisor to McKinsey and Company, the Inter-American Development Bank, and the Wilson Center in Washington DC. He has been the Chair and Ambassador for its Business Action to Support the Information Society (BASIS) initiative at the International Chamber of Commerce (ICC) in Paris. Molano is the President of Area Andina, a 60 thousand student university for low-income segments in Colombia, Panama, and Costa Rica, focusing in creating the talent for the digital economy. He is a board member of Davivienda, one of the largest banks in Colombia and Central America. He also advices and invests in technology startups in Latina America and Europe. Molano was the head of the Colombian Telecommunications Regulator (CRC) from 1997 to 2000.

Mr. Molano worked in international technology companies such as Telefonica in Spain, Ascom in Switzerland, and Bellsouth (now AT&T) in the US. He is electronics engineer and an economist from the Javeriana University in Colombia and has an MBA from IMD in Switzerland.
Mr. Molano is included in the list of world’s 100 most influential people in digital government in by Apolitical, and the 20 most influential people in fintech in Ibero America by TyN Magazine.