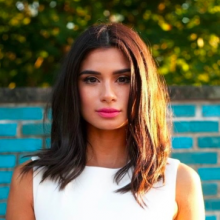 Diane Guerrero is an actress on the hit shows Orange is the New Black and Jane the Virgin. She was just fourteen years old on the day her parents were detained and deported while she was at school. Born in the U.S., Guerrero was able to remain in the country and continue her education, depending on the kindness of family friends who took her in and helped her build a life and a successful acting career for herself, without the support system of her family. She has written about her family in the Los Angeles Times and her book In the Country We Love, and she has appeared on CNN to discuss immigration issues. She also volunteers with the nonprofit Immigrant Legal Resource Center. She lives in New York City.

In the Country We Love was published in May 2016 with rave reviews from Kirkus Reviews and Publisher’s Weekly: “Guerrero transforms a truly terrible situation into something meaningful, using her story and her role as an Ambassador for Citizenship and Naturalization by the White House to try to help other immigrant families left in this terrible position.” Diane Guerrero continues the conversation through activism, speaking engagements, and the forthcoming television show of the same name. The young readers adaptation of her memoir, My Family Divided, was released in July 2018.