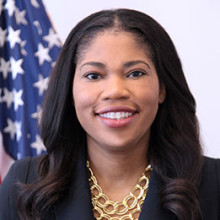 Denise Turner Roth was named Acting Administrator for the U.S. General Services Administration on February 23, 2015. As Acting Administrator, she is working to build on GSA’s progress and continue this agency’s efforts to deliver the best value in real estate, acquisition, and technology services to government and the American people.

Roth arrived at GSA in March 2014, when she assumed the role of Deputy Administrator. In this role, she provided overall organization management that helped improve performance throughout the agency. She worked with individuals at every level of GSA to support the mission and goals of the agency through the use of strategic and performance planning, measurement and analysis and regular assessment of progress and performance data to improve GSA’s results.

Roth has used her experience in executive level management throughout her 18 years of public service to further economic and administrative change. Her career in public service began on Capitol Hill in the office of Congressman Jim Moran. She has since served as a special assistant for legislative affairs in the office of Mayor Anthony Williams and as the public space manager for the District of Columbia Department of Transportation, where she implemented and oversaw a $36 million revenue stream and managed public space access for major utility and telecommunication companies.

Prior to joining GSA, she served as the City Manager for the City of Greensboro, NC, where her leadership helped pave the way for several new and creative management changes in the city, including the reorganization of city departments and divisions to promote efficiency and improve service delivery. She also helped establish the district office for North Carolina Congressman Brad Miller, served as district liaison and was the vice president for governmental affairs at the Greensboro Partnership where she successfully advocated for $60 million in state funds to establish the North Carolina A&T State and UNC Greensboro Joint School of Nanoscience and Nanoengineering. Roth welcomes the opportunity to continue her public service in the role of Acting Administrator, using her experience to further strengthen agency performance and service delivery.

Roth received her Bachelor’s Degree in Government and Politics at George Mason University, and is a graduate of the Public Executive Leadership Academy at the University of North Carolina at Chapel Hill.