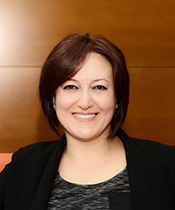 Defne (Sadıklar) Arslan is the Director of the Atlantic Council IN TURKEY program, the Council’s Turkey office, and its flagship event: the Istanbul Summit. Mrs. Arslan also serves as the Council’s regional representative with a specific focus on Turkey. Arslan launched the Council’s first office in the region in May 2015.

Arslan, a reputable economist, joined the US government in the US Embassy Ankara in 1997 as a senior economist responsible for monitoring the International Monetary Fund/World Bank programs, where later she was promoted to chief Turkey economist and senior adviser on Turkey. In addition to her expertise as an economist, Arslan has since added the energy sector, including energy policy, to her responsibilities, where she has worked with key interlocutors on local and regional energy policies, including relations with the Southern energy corridor.

Arslan started her career as a banker in Istanbul, where she successfully launched the early operations of Koc-American Bank, then a joint venture of American Express and Koc Bank. She also worked as a project finance coordinator for the Turkish International Cooperation Agency (TIKA), the Turkish developmeny agency, from 1993-1997.

After having started her earlier education in Tokyo, Arslan completed an MBA and an MA in banking and finance. She also received a BSc degree in economics from Middle East Technical University. She has been awarded with several grants and awards throughout her career and education.

Arslan speaks fluent English, Turkish, and Italian, and some French and Japanese.