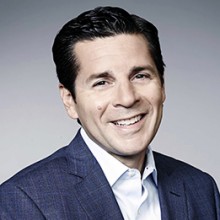 Born in the Great State of New Jersey, Dean’s comedy comes in large part from his unique background of being the son of a Palestinian father and a Sicilian mother. Dean, an award winning comedian who was at one time a practicing attorney, co-starred on Comedy Central’s “The Axis of Evil” Comedy TV special. He is the co-creator of Comedy Central.com’s critically acclaimed Internet series “The Watch List” featuring a cast of all Middle Eastern-American comedians performing stand up and sketch comedy. Dean has appeared twice on ABC’s “The View,” on the nationally syndicated TV series “Comics Unleashed with Byron Allen” and was one of five comedians profiled in the recent one hour TV Special entitled: “Stand Up: Muslim-American Comics Come of Age” which aired in the US on PBS and internationally on BBC World and Al Jazeera.

Dean co-created the comedy show “Stand up for Peace” along with Jewish comic Scott Blakeman which they perform at colleges across the country in support of peace in the Middle East and as a way of fostering understanding between Arab, Muslim and Jewish-Americans.

He is a also columnist for The Daily Beast and writes frequently for CNN.com as well as other publications.

Dean is the co-creator and co-producer of the New York Arab-American Comedy Festival which will hold its 11th annual Festival October 30-November 1, 2014. He is also proud to serve as the Executive Director of The Amman Stand up Comedy Festival – the first stand up comedy festival ever held in the Middle East which took place in December 2008. The third annual Amman Festival was held December 4-10, 2010.

Dean is proud to have received the first annual “Bill Hicks Spirit Award” for “thought provoking comedy” (named after the late comedian Bill Hicks) from the NY Underground Comedy Festival and the Hicks’ Family.

In addition to performing comedy throughout the US, Dean has performed in the Middle East in Jordan, Palestine, Saudi Arabia, Egypt, Lebanon, Oman, Israel, Qatar, and Dubai.