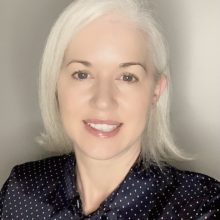 Dawn is the Executive Vice President of the Berggruen Institute which was launched in 2010 with Dawn as its first employee. In this position, she oversees all aspects of the organizational development including strategy, communications, program development, finance and operations.

The mission of the organization is to deepen understanding of the great transformations of our time and develop social, economic, and political institutions adapted to them. The key projects of the institute include the Future of the Democracy, Transformations of the Human, the Planetary, and Future of Democracy. Special initiatives include, the Berggruen Prize and Noema. In addition to being Executive Vice President, Dawn is co-director of the Future of Democracy program in which she works to develop new mechanisms for engaging citizen’s in the democratic process and harnessing collective intelligence for better, more stable governance.

Prior to joining the Berggruen Institute, Dawn was the Executive Vice President of the Pacific Council on International Policy, a global affairs organization based in Los Angeles. During the time she drove several special initiatives including the Energy and Security Committee and the Equitable Globalization Committee. She also co-directed the California Adaptation Advisory Council to the State of California under Governor Schwarzenegger. Prior to joining the Pacific Council, Dawn worked as a consultant for McKinsey & Company where she developed growth strategy for Fortune 500 companies in a variety of industries, focusing on the high tech and biotech industries.

She holds an MBA from University of Chicago Booth School of Business, and an undergraduate degree in Political Science from the McGill University. Dawn sits on the advisory boards of the Center for Media, Technology and Democracy at McGill University as well as for the Thomas Mann House, in Los Angeles and the Athens Democracy Forum. She lives in Hermosa Beach California with her husband Gene and two children, Ty and Jada.