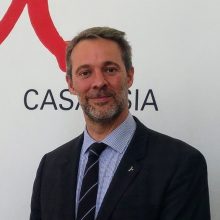 David Navarro-García joined the Spanish Foreign Service in 1996. He holds a PhD in Law from the University of Murcia (Spain).

At the Ministry of Foreign Affairs and Cooperation of Spain, he has served as a Head of Service at the General Secretariat for Foreign Policy and for the European Union as well as an Adviser and later on Head of Cabinet at the Spanish Agency of International Cooperation for Development. Mr. Navarro-García has also held various positions at the Department of International Cooperation and for Iberoamerica, including Adviser and Head of Cabinet for the Secretary of State for Latin America as well as Deputy Director General for Mexico, Central America and the Caribbean.

Since August, 2017, Mr. Navarro-García is the Director General of Casa Asia, an institution of public diplomacy aimed to foster relations of Spain with the countries of Asia and the Pacific.