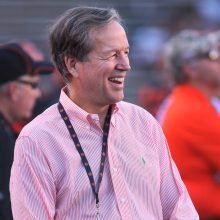 David W. Miller, Ph.D. David brings an unusual “bilingual” perspective to the classroom and the boardroom. Before receiving his Ph.D. in ethics and joining the faculty at Princeton University, he spent 16 years in senior executive positions in international business and finance, including eight years in London. David is the Director of the Princeton Faith & Work Initiative, a Senior Professional Specialist in ethics, and a Lecturer. In addition to his oversubscribed classes, ground-breaking research, and public outreach, he also serves as an advisor to corporate CEOs and senior executives on ethics, values-based leadership, culture, and the role of faith at work. As a thought leader, many C-suite executives seek his counsel, and scholars, NGOs, and the media seek his views. He has presented on “A Restoration of Trust?” in Davos and is a regular participant at the Yale CEO Summit. An article in the Wall Street Journal featured his work with one global client referring to him as the “on-call ethicist.” Prior to academia, David lived and worked in London, England for eight years, where he was a partner in a private equity firm that specialized in international investment management, corporate finance, and mergers and acquisitions. Before that he was a senior executive and director of the securities services and global custody division of HSBC Group, having held the same position at Midland Bank plc before its acquisition by HSBC. He moved to London as the managing director of the European operations of State Street Bank & Trust. He started his management career in the U.S., working for IBM for eight years in a variety of sales and marketing management positions. David speaks German, having lived and worked in Germany. He is a graduate of Bucknell University. After his corporate experience, he entered academia, receiving his M.Div. and a Ph.D. in ethics from Princeton Theological Seminary. Before joining the faculty at Princeton University in 2008 and launching the Faith & Work Initiative, he taught for five years at Yale Divinity School and Yale School of Management, and was the executive director of the Yale Center for Faith & Culture. At Princeton, the nickname of his signature course is, “Business Ethics: Succeeding without Selling Your Soul.” Harvard Business Review called David’s book, God at Work, (Oxford University Press), “most thoughtful.”