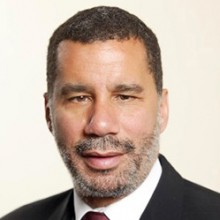 David A Paterson became New York’s 55th Governor on March 17, 2008. He immediately raised eyebrows when he warned off an impending fiscal crisis in his inaugural address.

Governor Paterson was ahead of the national curve in predicting and acting on the State’s fiscal downturn.  Despite the greatest economic crisis that New York State has ever faced, Governor Paterson enacted sweeping reforms on a wide range of issues facing New Yorkers.

During the next three years, he would reduce New York’s deficit by nearly 40 billion dollars (twice the amount of budget – cutting in any comparable period). He became the first Governor to sign legislation attaching criminal penalties to predatory- lending during the worst foreclosure crisis in American history. He overhauled the Rockefeller Drug Laws which excessively punished low-level drug offenders, while depriving judges of discretion-in-sentencing, for over 35 years. Governor Paterson would introduce landmark civil rights legislation that eventually ended legal discrimination against same-sex couples in New York. He would also increase the welfare allowance for the neediest New Yorkers for the first time in 20 years.

In 2009, Paterson settled 200 years of legal debate, when the NY State Court of Appeals upheld his appointment of a Lieutenant Governor, Richard Ravitch.

Since stepping down as Governor, David Paterson has hosted a popular drive time talk- radio show on WOR-am in New York City. Governor Paterson served as an adjunct professor of Government in 2011 and 2012 at New York University, and has since moved to Touro college school of Osteopathic medicine. Governor Paterson is a highly sought-after speaker by diverse entities and organizations, and often appears as a guest commentator on political news programs.

Governor Paterson, has been appointed by Governor Andrew Cuomo as 2014 New York State Democratic Party Chairman, It marks an occasion of a former Governor’s return to state service.