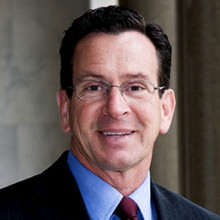 Dannel P. Malloy is serving the people of Connecticut for a second term as Governor.  Since 2011, his administration’s top agenda items have included creating jobs, improving public education, stabilizing the state’s finances, making long-overdue investments in the state’s transportation infrastructure, and protecting the environment.danie

Inheriting an economy that had essentially no net job growth for 20 years, the Governor has focused his efforts on strengthening initiatives that help small businesses create and maintain jobs.  He also has been a strong proponent of establishing Connecticut has a major center of innovation in growth industries that are leading 21st Century advancements, including in bioscience, digital media, engineering, manufacturing, and other fields.  During his first four-year term in office, Connecticut experienced growth in the private sector of more than 70,000 jobs, the best period of private sector job growth since the 1990s.

Recognizing that one of Connecticut’s best and most competitive resources is its well-educated workforce, he has made education a focus of his economic development efforts, investing in schools at every level.  At a time when many other states were cutting funding for public education funding, Governor Malloy actually increased funding to local schools and funded thousands of new pre-K slots so that all children, regardless of where they live or their family’s income, have access to early childhood education.  He has also worked with the state’s higher education institutions to implement initiatives that are making Connecticut a major hub of research and development.

Under Governor Malloy’s leadership, the state has ushered in a series of policies aimed at addressing income inequality.  Connecticut became the first state in the nation to pass a minimum wage increase to $10.10 an hour and the first to pass legislation guaranteeing paid sick leave for workers.  After years of trying to pass an Earned Income Tax Credit, Governor Malloy signed a bill that provides a tax break for working families.

In strong collaboration with Lieutenant Governor Nancy Wyman, he has also been a proponent of helping his state’s uninsured population obtain quality, affordable healthcare through the state’s health care exchange.  These efforts helped Connecticut become a national leader in implementing the Affordable Care Act, with more than 280,000 residents enrolling during the first open enrollment period, cutting the state’s uninsured rate in half.  Connecticut’s health care exchange is now assisting other states that are interested in duplicating its model.

Governor Malloy has taken a balanced approach toward stabilizing the state’s finances, recognizing that state government needs to create efficiencies while ensuring that the safety net remains intact for our state’s most vulnerable.  Upon taking office, he inherited a $3.67 billion deficit – one of the largest of any state in the nation – and made the tough choices to turn that deficit into balanced budgets.  He significantly slowed the growth of state spending, and under his first four years in office has replenished the state’s previously dried-up Rainy Day Fund with hundreds of millions of dollars.  His approach recognizes that making tough choices that may be difficult now will ultimately help get the state’s fiscal house back in order.

Governor Malloy has continually recognized that affordable housing is a key component of getting Connecticut moving again – one that helps individuals and families find stability and employment, and creates communities with a strong workforce that will attract employers.  Under his authority, Connecticut has made the largest investments in decades, committing over half a billion dollars towards affordable and supportive housing initiatives.  The Governor has also focused efforts on ending chronic homelessness among U.S. veterans, implementing programs that are aimed at ensuring veterans have access to decent housing, quality health care, education, and career opportunities.

After years of neglect, Governor Malloy has made unprecedented investments that will modernize Connecticut’s transportation infrastructure.  From improvements to Metro North to widening I-84 in Waterbury to countless other projects across the state, the scale of investment by the Governor dwarfs the efforts of previous administrations, even when adjusted for inflation.

The Governor has also taken every opportunity to preserve and protect Connecticut’s environment.  In 2014, he took a leading role in making sure the Preserve, a 1,000-acre parcel along Connecticut’s shoreline that was the last, large unprotected coastal forest between New York City and Boston, would become a protected property that will be enjoyed for generations.  Recognizing that energy and the environment are inextricably linked, the Governor created the Department of Energy and Environmental Protection, and charged the agency with implementing the state’s first ever Comprehensive Energy Strategy.  This strategy revolves around the mantra of “cleaner, cheaper and more reliable energy” and makes major investments in solar energy and other clean energy alternatives.

Collaborating with local, state and federal agencies, in addition to community-based nonprofits and other community advocates, he helped implement initiatives that are resulting in Connecticut experiencing its lowest crime rate in nearly four decades.  During his first term as Governor, Connecticut had one of the largest decreases in violent crime and property crime rates of any state in the nation – more than double the national average.  In 2013, he was proud to sign what some have called the most comprehensive gun violence prevention legislation in the country.

In 1982, he married his wife, Cathy, whom he met while they were students at Boston College.  They have three sons, Dannel, Ben and Sam.

Growing up, his mother – a nurse – told him that he has an obligation to leave this world a better place for having lived in it.  Throughout his career, he has routinely returned to his mother’s words as inspiration to help others overcome obstacles and take on challenges the way his parents and school teachers helped him overcome his disabilities and reach his goals.