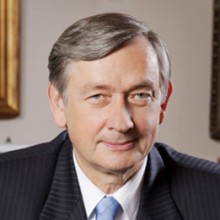 Former President, the Republic of Slovenia

His academic career took place at the Faculty of Law, University in Ljubljana, where he became assistant professor (in 1982), then associate professor (in 1987) and finally tenured professor of international law (1995). In the period 1983-1992 Dr Türk headed the University’s Institute of International Law and International Relations. In those years he devoted his energies to research and teaching, and to the efforts for the protection of human rights.

Based on his research and experience, Dr Türk initiated, in 1987, the establishment of the Human Rights Council, an independent group that laid foundations for the subsequent legislative work and advocacy for human rights in Slovenia. The Council was established early in 1988 and Dr Türk was the Council’s Vice-President. In 1991 he prepared the draft of the chapter on human rights for the Constitution of the newly independent Republic of Slovenia.

His international involvement in human rights work started in his student days, in mid 1970s. Since 1975 he has cooperated with Amnesty International and advised in cases involving human rights violations in the former Yugoslavia.

In 1982 he became member of the UN working group on the right to development. In 1985 he drafted the text of the Declaration on the Right to Development which was adopted by the UN General Assembly in 1986.

From 1984 to 1992 he served as an independent expert – member of the United Nations Sub-Commission on Prevention of Discrimination and Protection of Minorities. In this framework he prepared a report on the right to freedom of opinion and expression and a series of reports on the realization of economic, social and cultural rights. In 1990 he was Chairman of the Sub-Commission.

Several years later he was elected to the UN Human Rights Committee, established under the International Covenant on Civil and Political Rights. He served as member of the Committee in the years 1996 -1998.

After Slovenia’s declaration of independence in June 1991 Dr Türk took an active role in the country’s diplomatic activity. In July and August 1991 he was authorized by the Minister of Foreign Affairs of Slovenia to represent the then still unrecognized Slovenia in Geneva in contacts with representatives of the UN, the CSCE and the Council of Europe. From September 1991 to August 1992 he was a member of the Slovene delegation at the Conference on Yugoslavia. On behalf of Slovenia he drafted a number of memoranda for the Arbitration Commission of the Conference on Yugoslavia (the Badinter Commission) whose advisory opinions defined the legal framework for state succession to former SFR Yugoslavia.

In August 1992 Dr Türk was appointed Ambassador, Permanent Representative of the Republic of Slovenia to the United Nations. He established the Permanent Mission of his country to the UN and developed a system of activities in the UN General Assembly with particular focus on political and security issues as well as on issues of human rights and humanitarian assistance.

Assistant Secretary-General of the United Nations

Following the successful conclusion of Slovenia’s term as non-permanent member of the Security Council, Mr. Kofi Annan, the Secretary-General of the United Nations Organization, appointed Dr. Türk as Assistant Secretary-General for Political Affairs.

For more than five years his tasks at the headquarters of the UN in New York included analytical and advisory activity relating to the crisis situations of the time, such as the Balkans (in particular Kosovo and Macedonia), Palestine, Lebanon, Afghanistan, Iraq, Myanmar, North Korea, East Timor, Colombia, Haiti, Venezuela and others.

As Assistant Secretary-General he was also involved in a number of thematic projects of the UN. They included strengthening of the UN activities for prevention of armed conflicts, participation of the UN in the activities of new and restored democracies, cooperation with the Community of Democracies, preparation of the reports on the Responsibility to Protect, among others.

He was also actively engaged in activities aiming at reform, in particular those leading to the creation of the UN Human Rights Council in 2006.

After 13 years in New York Dr Türk returned to Slovenia in the summer of 2005. He resumed teaching international law and related subjects at the Faculty of Law in Ljubljana. From May 2006 to December 2007 he served as Vice-Dean of the Faculty of Law.

In his academic work Dr Türk published over 100 articles in various law journals and three books. The latest among them, “The Foundations in International Law”, was published in 2007 (in Slovene) and has been translated into Hungarian, Czech and Russian. (The second edition was published in 2015.)

At present Dr. Danilo Türk has the status of Former President of the Republic of Slovenia. He is member of the Club de Madrid, a non-governmental organization of former, democratically elected heads of state and government.

Since 2014 he is Chairman of the Board of Directors of the Global Fairness Initiative, a Washington based NGO devoted to innovative projects fostering greater fairness in development and overcoming poverty.

He is also emeritus professor of law, university in Ljubljana, visiting professor of law at Columbia Law School in New York and non-resident senior fellow of Chongyang Institute for Financial Studies, Renmin University of China in Beijing.

Since 1976 Danilo Türk is married to Barbara Miklič Türk. They have one daughter and one grand daughter.