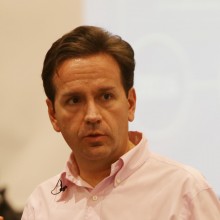 Secretary of Security, Coexistence and Justice of Bogotá City

Daniel Mejia is Secretary of Security of Bogota, Colombia, where he is in charge of leading security and justice policies in the city of Bogota. Before becoming the first Secretary of Security of Bogota, Daniel was Associate Professor in the Department of Economics and Director of the Research Center on Drugs and Security (CESED) at Universidad de los Andes in Bogota, Colombia, where he taught since 2006. He received a BA and MA in Economics from Universidad de los Andes and a MA and PhD in economics from Brown University. Prior to joining Universidad de los Andes he worked as a researcher at the Central Bank of Colombia and Fedesarrollo. Daniel he has been actively involved in a research agenda whose main objective is to provide independent economic evaluations of security and anti-drug policies implemented in Colombia. In 2008 he was awarded Fedesarrollos´s German Botero de los Ríosprize for economic research. Daniel has designed and evaluated different interventions aimed at reducing crime in cities such as Medellin, Bogota and Cali. Among these, Daniel designed (together with the National Police and the Ministry of Defense) a hotspots policing intervention in Medellin and carried out an independent evaluation of this intervention. Also, he has evaluated the effects of the installation of CCTV cameras on crime in Medellin and the effects of the restriction of alcohol sales on crime in Bogota. Daniel, together with Alejandro Gaviria, published in 2013 the book “Políticas antidroga en Colombia: éxitos, fracasos y extravíos” (Anti-drug policies in Colombia: successes, failures and lost opportunities) at Universidad de los Andes, in Bogota. Between 2011 and 2012, Daniel was a member of the Advisory Commission on Criminal Policy and more recently he was the President of the Colombian Government´s Drug Policy Advisory Commission. In March 2015 Daniel was awarded the Juan Luis Londoño prize, awarded every other year to the best Colombian economist under 40.