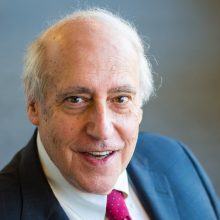 Dan Glickman is the Executive Director of the Aspen Institute Congressional Program, a nongovernmental, nonpartisan educational program for members of the United States Congress. The program provides lawmakers with a stronger grasp of critical public policy issues by convening high-level conferences and breakfast meetings in which legislators are brought together with internationally-recognized academics, experts and leaders to study the issues and explore various policy alternatives.

He served as the U.S. Secretary of Agriculture from March 1995 until January 2001. Under his leadership, the Department administered farm and conservation programs; modernized food safety regulations; forged international trade agreements to expand U.S. markets; and improved its commitment to fairness and equality in civil rights.

Before his appointment as Secretary of Agriculture, Glickman served for 18 years in the U.S. House of Representatives representing the 4th Congressional District of Kansas. During that time, he was a member of the House Agriculture Committee, including six years as chairman of the subcommittee with jurisdiction over federal farm policy issues. Moreover, he was an active member of the House Judiciary Committee; chairman of the House Permanent Select Committee on Intelligence; and was a leading congressional expert on general aviation policy.

Glickman is also a Senior Fellow at the Bipartisan Policy Center in Washington, D.C. The BPC was formed in 2007 by former Senate Majority Leaders Howard Baker, Tom Daschle, Bob Dole and George Mitchell to develop and promote bipartisan solutions to the country’s problems and to promote civility in government. He is the co-chair of the Chicago Council on Global Affairs’ global agricultural development initiative. He is the author of “Farm Futures,” in Foreign Affairs (May/June 2009).

He received his Bachelor of Arts in history from the University of Michigan and his J.D. from The George Washington University. He is a member of the Kansas and District of Columbia Bars.