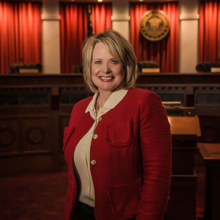 Attorney General, The State of Colorado

General Coffman began her tenure at the Colorado Department of Law in March of 2005 when she was appointed Chief Deputy Attorney General. Coffman served in this role for 10 years, acting as chief of staff and chief operating officer for the largest law firm in the State of Colorado. While performing as Chief Deputy, Colorado Law Week recognized General Coffman’s accomplishments by naming her as the Best Public Sector Lawyer in September 2012.

In 1997, General Coffman’s first job in Denver was working for the Colorado General Assembly’s Office of Legislative Council. She staffed the Senate Judiciary Committee and assisted with a study of the state’s adult parole system. After a brief time in private practice, Coffman joined the senior management team at the Colorado Department of Public Health and Environment. There she served first as the agency’s Director of Legal & Regulatory Affairs and later as its Deputy Executive Director. She gained extensive experience with environmental issues related to air and water quality, hazardous waste regulation, and with public health issues including disease control and epidemiology, nursing home and hospital regulation, and state interface with local public health systems. General Coffman moved to the State Capitol in 2004, where she had the honor of serving as Chief Counsel to Colorado Governor Bill Owens.

Coffman’s legal career began more than 25 years ago in the Georgia Attorney General’s Office. As a courtroom attorney, she defended the state’s juvenile justice system and public health department. Later working as attorney for the 1996 Centennial Olympic Games in Atlanta, she acted as the primary liaison with the victims and their families following the 1996 domestic terror attack in Centennial Olympic Park.

A native Missourian, General Coffman graduated from the University of Missouri-Columbia in 1983. She worked in development for children’s hospitals and pediatric research for several years before completing law school at Georgia State University College of Law in Atlanta in 1991.

As Colorado’s Attorney General, Cynthia H. Coffman maintains a commitment to her office’s mission of providing ethical, professional and independent legal services to the State of Colorado and all of its citizens.