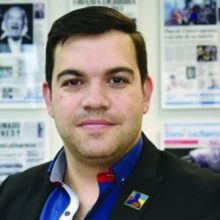 Juan David Vélez was elected as Representative to the House abroad on March 11, 2018 with the support of 33,000 Colombians.

Participated in the construction of the Democratic Center party, as a founding member; integrated the first list to the Senate on behalf of the youth; served as legislative advisor to Senator Thania Vega for international affairs; and he was the coordinator of the International Committee of the Democratic Center. Likewise, he is a columnist, political consultant and lecturer.

After living in the United States, in 2001, Vélez has carried out political activism among Colombians abroad. He knows firsthand the reality that migrants live, and has a broad management of international relations and cooperation.

Juan David Vélez defends the principles and promotes the ideological line of his party, the Democratic Center.

Currently, Congressman Vélez is part of Commission II of the House of Representatives, in charge of Security and International Relations, and of the Foreign Affairs Advisory Commission, cited by the President of the Republic.